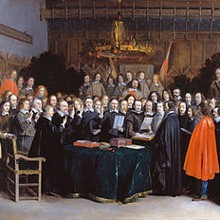 Peace of Munster ends the Eighty Years War and signals the start of dominance by Amsterdam.

Peace of Munster ends the Eighty Years War and signals the start of dominance by Amsterdam. 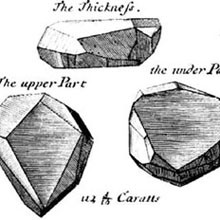 The Peace of Münster between the United Netherlands and Spain, which was signed in 1648, ended the Eighty Years War. It stipulated that the Scheldt be closed to navigation, severely eroding Antwerp's position as a trading centre. This restriction was to remain in force until 1863.

During the second half of the 17th Century, Jean-Baptiste Tavernier (1605 -1689) a French traveller of Antwerp descent, made six journeys to India, and reported extensively on its diamond mines and diamond cutting techniques. He brought back many diamonds, including some which he sold to King Louis XIV at Versailles.