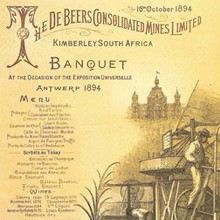 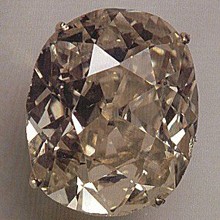 Diamond fever erupts in South Africa after the Eureka find.

Diamond fever erupts in South Africa after the Eureka find. 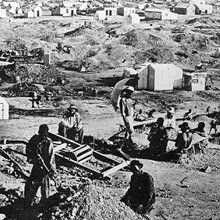 Opening of the Kimberly mine (Big Hole).

Opening of the Kimberly mine (Big Hole). 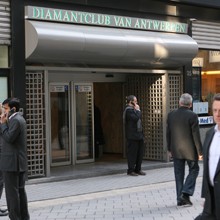 Antwerp’s re-emergence as a major European port coincided with the discovery of massive quantities of rough diamonds in South Africa in 1866. As it became more apparent that this was to be the richest source of diamonds to be discovered since India, a diamond rush ensued. Among the ambitious prospectors who were drawn to dusty town of Kimberley were a number of Englishmen, Cecil John Rhodes and the brothers Harry and Barney Barnato. Ambitious and enterprising, they bought up smaller claims and eventually became the largest mining conglomerate in Kimberley. In 1888 they merged their companies, and so was born De Beers Consolidated Mines Limited, the forerunner of the firm that still plays a leading role on the diamond stage today.

The influx of diamonds from South Africa changed the world market rapidly. Demand surged and the need for experienced and skilled workers became a necessity. Antwerp’s ability to compete with Amsterdam in terms of labour and rough supply improved considerably, and within a relatively short time it resumed its leadership role in the diamond industry.

With the influx of dealers into the city towards the end of the 19th century, the volume of goods traded in Antwerp rose substantially. The dealers would gather in several of the city’s coffee houses, and an informal diamond club was created at the Cafe Flora in Aneesensstraat in 1886.

On October 8, 1893, the city's first bourse, the Diamantclub van Antwerpen, was established to promote and facilitate trade and industry in diamonds and other precious stones. Soon after its creation, the Diamantclub purchased a property at 40-42 Pelikaanstraat. The building that was constructed consisted of a trading hall and eight offices. It was the cornerstone of what was to become the Antwerp diamond district. The district was centred around three important streets in close proximity to city’s massive new railway station, namely Rijfstraat, Hoveniersstraat and Schupstraat.